“When your entire existence is a political statement, you have to be careful to stay alive.”

“Signals” is a short autobiographical comic about the life of Fauzi, a malay transgender man of faith who is deeply closeted for his own safety. Being someone as part of both the LGBT and of faith demographic, he often finds himself in crossroads as both communities find him an oxymoron.

The story explores his perceptions on certain sounds as cues for his safety and wellbeing. These sounds range from simple auditory cues like a clock chime to complex ones such as tone and inflection in speech. Illustrated as little threat bars in a HUD-like format, Fauzi analyses these sounds to discern how dangerous they potentially are to his safety. 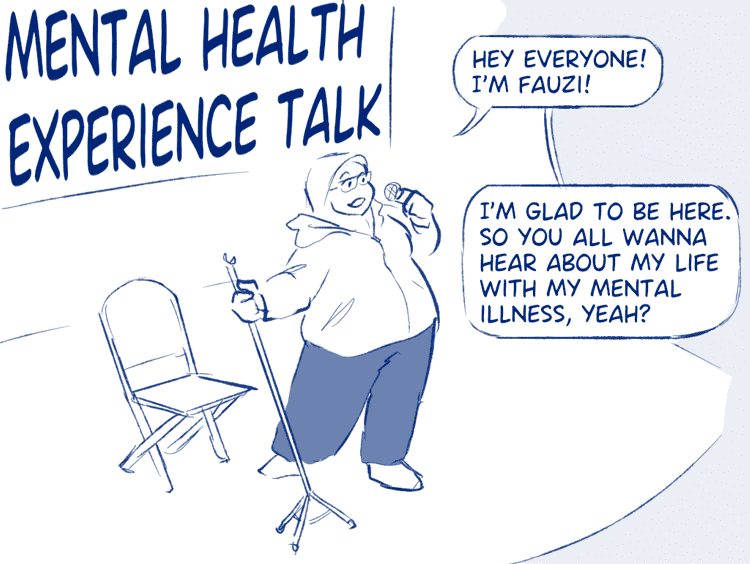 An Interview with Farid Nad

When did you first start drawing, and how has the experience changed for you since?

FARID: I first started drawing when I was 3, because I wanted to draw dinosaurs wrestling with each other. I would doodle on all of my dad’s printing paper, it’s a pleasant memory to remember. Since then though, I started doing art for money online when I was 12 (by using my mom’s PayPal), because I wanted to earn money so badly to buy video games. It was also the time my dad bought me a pen graphics tablet for my birthday, and I had been focused on digital art ever since.

Why is storytelling and illustrating your main form of expression?

FARID: I would describe myself as a very visual person, and I best understand and convey concepts with imagery. I have also always had an active imagination and loved weaving stories to escape to worlds when the one I was currently in wasn’t too keen to have me in it. I was frequently bullied and isolated, so the only thing that brought me joy for a good while was drawing and storytelling with my own comics. I haven’t had time to do them as much when I was finishing my studies, but I am thankful now that I can turn back to it to support my life once more.

What inspired you to submit a story to SOUND: A Comics Anthology?

FARID: In all honesty, survival. I was very tight on my finances and going on board any opportunities I could come across. However, I noticed how interesting the premise of the SOUND comics anthology was with trying to convey stories about sound through a medium that lacks it. I’m happy to say this was my first ever successful pitch anywhere, and it had been eye-opening on how the comics world wasn’t as intimidating as I thought. 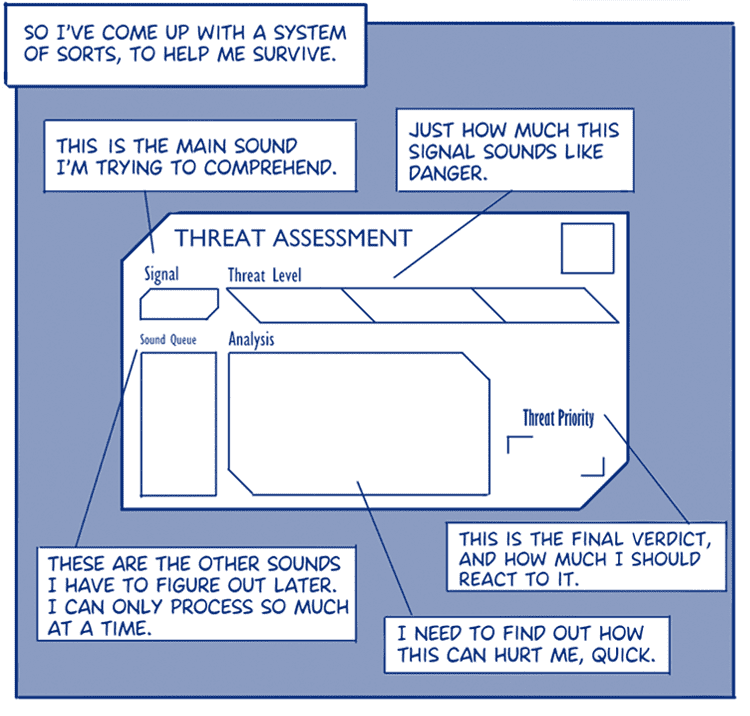 What inspired you to create “Signals”?

FARID: While I’ve written and drawn many comics of my experiences by projecting them on my original characters or other fandoms I was familiar with, I had never actually made a comic in an autobiographical lens. A lot of folks had suggested I make a comic about my experiences whenever I shared them, so I took the leap in my pitch to try and do so. 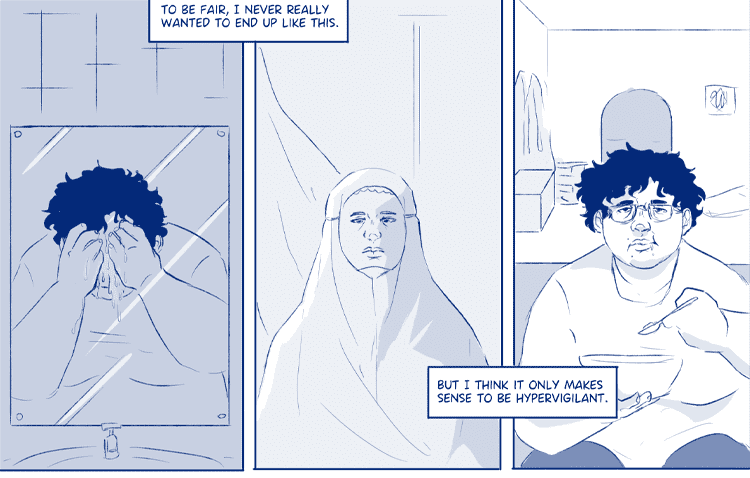 What sort of research went into the creation of "Signals"?

FARID: I suppose my life experiences? It is entirely from my own lens as a trans and bi person and how I visualise my thought process into an easily digestible HUD. The design of the HUD was also based on how I process audio cues as an autistic person as well. I try to segment what I’m hearing one by one so I don’t get sensory overloaded by the many noises at once, and my heightened alertness comes from my general anxiety disorder and general panic disorder. Putting them together in a HUD design makes it easier for neurotypical and mentally able folk to understand and digest my thought process.

Did you encounter any major stumbling blocks while coming up with "Signals"? If so, what were they and how did you manage to overcome them?

FARID: Well, mainly the fact I was writing and illustrating my trauma. It was particularly hard to write some dialogue of some scenes due to the fact that it’s based on real things I have heard and been told, some in verbatim. I have most if not all my Form 1–3 memories repressed as well as my days at my notoriously racist university, and digging that back up was particularly gruelling. Thankfully, I managed to keep myself grounded by taking frequent breaks. 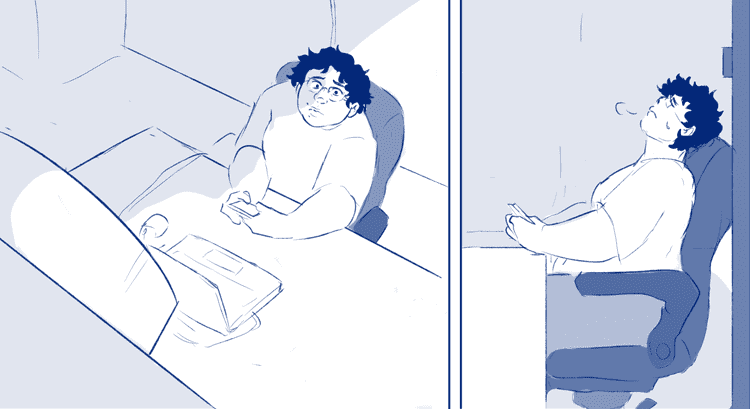 What are some of the interesting details about the characters of "Signals" that you wish to highlight to readers?

FARID: Fauzi is a very obvious stand-in for myself. It was extremely challenging for me to find a way of drawing myself that I was satisfied with as I experience both gender dysphoria and body dysmorphia. I had to frequently adjust how I looked as I was not only critical in how I was drawing, but at how I looked. Referencing myself from photos and a mirror was pretty hard, especially since I cannot stand staring too long at myself. Fortunately, I managed to come up with a decent design that I could stick on model to for the entire comic.

Who is your intended audience for “Signals”, and what do you hope that they learn by reading your story?

FARID: The audience I had in mind was the general Malaysian public, but also specifically Malays and LGBT+ Malays who might experience the same thing as I did. I want the comic to give solidarity to people of my community, at the same time shedding light on the experience for cishet malay folk who always downplay the oppression that we face or outright deny it, or even worse telling us we deserve it. I want my people to know they’re not alone, and everyone else to know that we do feel very alone.

The message I had in mind was basically that LGBT+ Malaysians, specifically Malay ones, have their own unique set of marginalisation that they go through. While racial politics may not affect them as much, they still will be surrounded by it, and even then, the country freely disregards them and considers them criminals, if not nonexistent. As said before, I want my community to have solidarity that what they’re feeling is not just them alone, and for cishet folk, allies or otherwise, to realise the magnitude of our sense of danger and unsafety.

“Signals” is a deeply personal story and we’d like to thank you for sharing this story with us – we hope that it will touch and enlighten readers in some ways, regardless of whether they have similar personal experiences with its protagonist. How do you feel now that you have completed this story?

FARID: I honestly feel quite relieved, and I think illustrating the story was actually a sort of cathartic process, even if hard. It feels liberating to be able to vent about my struggles with my identity via a creative outlet, especially with the possibility that someone can relate to it as well. I hope that somewhere out there another Fauzi knows that they aren’t alone.

What are other stories that you’d like to create in the near future?

FARID: I am hoping to return back to my stories with my original characters, and finally bring justice to the worlds I had created in my school days. I have a few of those projects currently on the backburner, but as soon as I have the time, I’d like to go back at it.

FARID: I think it is extremely important because representation of Southeast Asian stories, especially from my experience specifically Malay ones are hard to come by. I would love to have read a story about someone like me, both in fantastical and realistic settings. Feeling seen can inspire so many folks to strive better and that their dreams aren’t unrealistic at all.

What are some developments that you would like to see from our regional comics scene in the near future?

A 24-year-old kampung kid hailing from a sleepy coastal town, Farid is a full-time freelance character designer and illustrator. He also has a degree in English for Professional Communication.

Partly from passion, partly from struggling with ableist corporate culture hiring practices, Farid made the best of the accessibility of information in the Internet Age to pursue a career in art despite the lack of formal education in illustration. Growing up struggling with rejection from many aspects of himself, he uses the medium of digital art to share his experiences, as well as involving himself in communities to mutually aid fellow marginalised individuals.

Farid also dabbles in disability activism via comics or linguistic analysis, but nowadays mainly focuses on his niche in comics, character design and tabletop RPG illustrations. You can find Farid at https://farideacs.xyz.